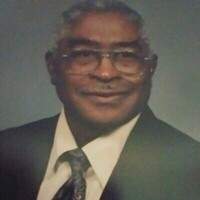 Mr. Willie B. Fonzer looked towards Heaven and answered the call of his Heavenly Father on Tuesday, July 13, 2021, at 9:41 a.m., at the Parkview Nursing and Rehabilitation Center of Paducah, Kentucky.  He had reached the age of 88 years, 1 month and 29 days.  Willie was born May 14, 1933, in Winona, Mississippi, to the union of the late King Fonzer and Mary Rogers Fonzer.

Willie was a former deacon under the pastoral leadership of Elder David H. Birchettin in Marion, IN, and attended Christ Temple Apostolic Church here in Paducah, KY, until his health began to fail.  Willie worked for the RCA Factory for two years and then took employment with the General Motors Corporation where he was promoted as supervisor.  He later was a graduate of the GM Dale Carnegie Course in effective leadership in 1968.  While in Indiana, Willie was a member of the Masonic family at Wilson Lodge #12.

On December 1, 1953, in Indianapolis, IN, Willie entered military duty with the United States Army.  On November 10, 1955, he was Honorably Discharged and later became a member of the American Legion.

Willie met and married the love of his life, Delois Bowen Fonzer, on June 20, 1987.  To his death, their vow of love was help true.

Willie loved all sports, especially football and the Kentucky Wildcats.  He was quite fond of woodcarving cars and trucks.  Willie was an outdoorsman and would work with all sorts of gadgets as he would be called “Mr. Fix-It”.

He leaves to cherish his many memoires:  His Loving Wife of 34 Years, Delois Fonzer of Paducah, KY; Three Sons, Christopher Fonzer of Ft. Wayne, IN, Byron R. (Sandra) Bolwn of Indianapolis, IN and Dennis D. Bowen of Marion IN; Four Daughters, Sylvia Pirtle of Jackson, TN, Andrian Mason and Tyann Tapps, both of Indianapolis, IN and Gloria Bolen of Paducah, KY; 10 Grandchildren; Several Nieces, Nephews, Cousins and Friends.

Those awaiting to greet him at Heaven’s Gates were his parents, King Fonzer and Mary Rogers Fonzer; his son, Elvis D. Fonzer, his daughter, Berdina Fisher, and his two sisters, Irene Cotton and Edna Turner.

Willie B. Fonzer will be remembered by all who dearly loved him.

Friends may also call Saturday at the church from 11:00 a.m. until the funeral hour.