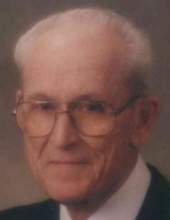 Thomas A. Osborne Sr. 93, of Paducah, formerly of Canton community of Trigg County, passed
away at 4:15 am on Wednesday, August 03, 2016 at his home.
Mr. Osborne along with his wife, Bette were the owners and operators of Osborne Laundry in
Paducah and he was a retired as a inspector for the City of Paducah. He was a United States Army
veteran and a member of Trinity United Methodist Church.
He is survived by his loving wife of 70 years, Bette Jeane Coker Osborne; daughter, Rhonda
Osborne Goss and husband Russell of Starkville, MS; son, Thomas Osborne Jr. of Paducah; two
grandchildren, Matthew Ryan Goss and wife Alexa, Alison Goss Eng and husband Carl; four great
grandchildren, Caden Thomas Eng, Dylan Grace Eng, Addyson Rose Goss, Kylie Ryan Goss; and
several nieces and nephews.
He was preceded in death by four sisters and three brothers. His parents were Henry Norman
Osborne and Hettie Lucy Colley Osborne.
Funeral services for Mr. Osborne will be 12:00 noon on Friday, August 5, 2016 at Milner & Orr
Funeral Home of Paducah with Rev. James Calhoun officiating. Burial will follow at Maplelawn
Park Cemetery.
Visitation for Mr. Osborne will be from 11:00 am until 12:00 noon at Milner & Orr Funeral Home
of Paducah.
Expressions of sympathy can be made to Trinity United Methodist Church, 6125 Blandville Rd,
Paducah, KY 42001.
You may leave a message or light a candle online at www.milnerandorr.com