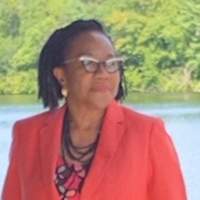 “For I am in a strait betwixt two, having a desire to depart, and to be with Christ; which is far better: Nevertheless to abide in the flesh is more needful for you.” (Philippians 1:23-24)

Heaven welcomed a beautiful Angel on Sunday, November 1, 2020, 1:40 a.m., from her residence in Paducah, Kentucky. Syretha Moore entered into eternal rest at the call of her Heavenly Father at the age of 67 years, 1 month and 25 days. She was born in Paducah, Kentucky to the late Leroy Jones and Demesta Green Jones on September 16, 1953. She is now basking in Glory not only with her parents, but also with her two sisters, Joyce Booker and Sadie Jones and with her two brothers, Bobby Jones and Pastor Emmett Lee Jones.

Syretha was a member of Waldo Baptist Church in Metropolis, Illinois. She was a 1971 graduate of Paducah Tilghman High School and attended the Paducah Community College. Syretha retired from the Paducah Sun Newspaper after 25 years of loyal and dedicated service. She was also the owner and operator of Moore’s Brightmore Home Care.

Syretha was introduced to a guy by one of her friends, Sharon Coleman Sparks. This man became the love of her life and they became man and wife on February 23, 1974, in Paducah, Kentucky. She became the loving wife and followed her husband untiringly in his ministry that followed.

Syretha was an inspiration to one and all. She was graceful, kind, selfless, and empathetic to others, and always kept a “Million Dollar” smile on her face. She was so devoted to others, both family and friends alike. He brother, Joe, from his heart knows and exclaims that she saved him from himself. Syretha was a “Fashionista” in her own way. Her home was a good example of her skill in interior decorating and design. Added to those skills were her abilities to cook to please the palates of many and to be her own seamstress as she put together her wardrobe for all to see. Syretha will always be known and remembered for her ministering to other women who may have been either going through or coming out of a crisis. Syretha even found time to go bicycling or walking with her husband.

Syretha Moore will be sadly missed by all those who knew and loved her so well.

Friends may also call at the church on Saturday from 12:00 Noon until the funeral hour.