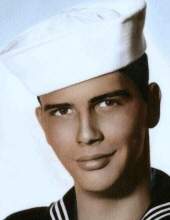 Ronnie was born in Paducah, KY on August 22, 1946 to William "Jack" and Mary Hobbs. He was proud to have served his country in the U.S. Navy during Vietnam. He was a retired auto mechanic.

Family was very important to Ronnie and he treasured his time with them. He often said how much he loved his kids and his grandkids. Many of the stories he best loved to tell involved birthday parties for his grandkids. Recent hobbies included enjoying hot dogs on the sidelines of soccer games and spending afternoons sitting outdoors with his friends at his apartment in Shelbyville. He loved to make the people around him laugh.

In lieu of flowers, the family requests that expressions of sympathy be made in the form of contributions to the American Heart Association, Kentucky Region 240 Whittington Parkway Louisville, KY 40222.

You may leave a message of sympathy or light a memorial candle at www.milnerandorr.com