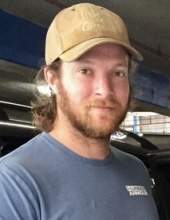 Robert Wyatt McDaniel Webb, 28, of Waverly, Tennesse, first called "Daniel" by his mom, Sandy-the first person to play catch with him-was reunited with her in Heaven Saturday evening, October 14, 2017. Daniel was born August 18, 1989 at Western Baptist Hospital in Paducah, Kentucky. For 28 years he lived a wonderful life. He had a loving, supportive family and had several never-say-no friends. But most importantly, God blessed him with two beautiful daughters, Baylie Kaye and Kimber Rose. Let there be no mistake, Daniel Webb died a happy man.

Daniel was an amazing and loving husband, father, son, brother and friend. He was truly a family man. He took enormous pride in his home, which he called "Webb Ranch". He loved baseball, hunting, the outdoors, storytelling, John Wayne, and of course, his country. He was the grandson to three WWII veterans and he always stood proudly for the national anthem - especially on September 4th, 2013 with his mother and father as witnesses at Yankee Stadium where Daniel honored the flag before he faced his first batter, Derek Jeter, in his major league debut game (98 MPS at the knees, inside corner, locked him up, should've been strike 3).

Daniel was a strong man and was guided by two mottos from two great actors. Sir Laurence Oliverier's motto, "humble enough to prepare, confident enough to perform." And John Wayne's motto of, "courage is being scared to death, but saddling up anyway."

His God-given baseball talent, his "first-one-there and last-one-to-leave" work ethic and his never-quit attitude took him to the highest level of his sport. However, it was his caring, compassionate and giving heart along with his magnetic personality that made him the unforgettable big-leaguer in life that he truly was. Indeed, Daniel's passing is a horrible loss to his family and friends, but the loss of his stand-tall, walk proud, respect others, man's man influence on our culture is the true tragedy of his passing.

He was preceded in death by his mother, Sandra Seay Webb; grandparents, Champ and Dean Webb; frandtfather, Ernest Seay.

Funeral services will be held at 11:11 a.m. on Thursday, October 19, 2017 at Milner & Orr Funeral Home and Cremation Services of Paducah. Burial will follow at Maplelawn Park Cemetery. Visitation will be held after 5:00 p.m. on Wednesdy, October 18, 2017 at the funeral home.

Following service Thursday, there will be a Celebration of Life held at 2:00 p.m. at The Twinkling Star in Paducah, KY with a showing of the movie "The Sandlot" at 7:00 p.m. All friends are welcome to attend and feel free to bring your children.