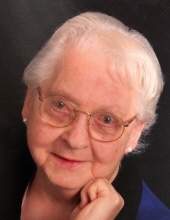 Robbie Orlean Wring, 87 of Henderson, KY passed away March 22, 2018 at the Lucy Smith King Care Center. she was born on March 25, 1930 in Lola, KY to the late Robert and Bonnie (Radcliffe) Crutcher. She was a member of the First Baptist Church.

Services will be held on Monday, March 26, 2018 from 11:00 AM at Tomblinson Funeral Home in Henderson. Visitation will be Monday, March 26, 2018 from 9:00 AM - 11:00 AM at teh funeral home. Dr. Robert Wring and Michael Wring will be officating. Burial will be at Maplelawn Park Cemetery & Mausoleum in Paducah, KY. ONline condolences can be made at tomblinsonfuneralhome.com.