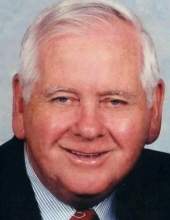 He was born in Eugene, Indiana and graduated from Newport High School in 1943. Enlisting in the US Navy, he served in the South Pacific until his honorable discharge. In 1948, he graduated from the Indiana College of Mortuary Science.

On August 22, 1948, Mr. Grumley married Mary Ruth Hussmann of Danville, Illinois. They moved with their family to Paducah in 1962. With his brother-in-law Lou Hussmann, he opened Paducah's first fast food franchise restaurant, Burger Chef, located at the corner of Ninth and Kentucky Avenue.

Mr. Grumley was a member and past congregational president of St. Paul Lutheran Church. On November 4, 1975, he was elected a Paducah city commissioner, serving until his retirement in 1998. He was the mayor pro tem for 7 years.

The Chamber of Commerce recognized Mr. Grumley with its first "Newcomers" award in 1967. He served as the 1971 Chamber president. As a member of the Lions Club of Paducah, he served as club president, chairman of the Lions Club WPSD Telethon of Stars, was named a Melvin Jones Fellow and Lion of the Year. He maintained an active membership until his death.

Mr. Grumley was elected president of the Retail Merchant's Association and was chairman of the Paducah Tourist Recreation and Convention Commission. He has served as a director of many civic organizations including the American Red Cross, Salvation Army, Western Kentucky Restaurant Association, Purchase Area Economic and Development Council, Paducah Transit Authority, Purchase Area Housing Corporation, Carson Park Board, Paducah-McCracken County Emergency Communication (911) Board, Paducah Waterworks, and Paducah-McCracken County Senior Citizens board. He has been an active member of American Legion Post #31 and the Citizens Police Academy.

He was preceded in death by his parents, Paul Everett Grumley and Esther Nora Dowers Grumley Gragg, and his sister, Betty Joann Grumley Bizzy.

Visitation will be from five until seven pm Monday, April 11, 2016, at Milner and Orr Funeral Home of Paducah.
The funeral will be at 11am Tuesday, April 12, 2016, at St. Paul Lutheran Church with Pastors Corey Aker and David Appold officiating. Interment will follow at Maplelawn Cemetery.
The family requests expressions of sympathy be made to St. Paul Lutheran Church, 211 South 21st Street, Paducah, KY 42003.