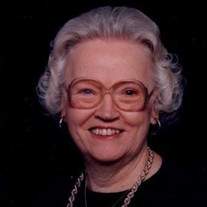 Nida Jean Bichon stepped from this world into eternal life on February 1, 2018 comforted
by her family and cats. Born May 23, 1926 in Louisville, KY she moved to Paducah in
1932 with her parents, Bertha Lillian (Powell) and Theodius Russell Young, owners of Ted
Young's Paint Store. She is believed to be the last charter member of Trinity Baptist
Church which had its beginnings in the living room of her parent's home.
She married Henry Armand Bichon, Jr. on September 12, 1945. Caring for him and their
three daughters was always intertwined with being a Sunday School teacher, working in
vacation Bible school, making food for a Trinity event or family, collecting items for mission
boxes, knitting hats to send to eastern Kentucky and missions around the world, taking on
the role of financial secretary, being director of WMU, singing in the choir, visiting the
homebound, sending cards with words of encouragement, and bringing home bags and
bags of clothing to mend, wash and iron for the Trinity Clothing Closet. Her love of sewing
and crafts manifested itself especially before school when her girls needed clothes and
later when she dressed countless dolls for the clothing closet.
She eventually entered the work force when the youngest daughter was in high school.
She and Henry became real estate brokers and opened Bichon Real Estate. She joined
the Paducah Board of Realtors serving as President and was the 1977 American Business
Women's Association Woman of the Year. Leaving real estate, she eventually retired after
ten years as a clerk in the McCracken County Clerk's office
Self-described as "not fancy", her family would add smart, persistent, compassionate,
creative and a woman of great faith. The central core of her life has been her faith in God,
and her mission has been to serve her family and church. She supported many causes,
but animals and native American children's charities were at the top of the list. There
wasn't a stray cat or yard of polyester that did capture her heart.
In addition to her parents, Nida was preceded in death by Henry, her husband of 53 years.
She is survived by three daughters, Bonnie Sue Holland of Hancock, MI; Katherine
Elizabeth (Rick) Goode of Charleston, MO; and Barbara Jane Bichon of Paducah, five
grandchildren, Ellen Lynn (Lyle) Perry of Marquette, MI; Brian Keith Holland of Marquette,
MI; Shea Elise (Jay) Cody of Pittsford, NY; Sara Katherine (Ryan) Goode-Kaye of
Richmond, VA; Benjamin Richard Goode of Bluemont, VA; 10 great grandchildren; 6
great, great grandchildren; and Barbara's borrowed children and grandchildren, Cheryl
Ann Powley, Lorna Kirby Holley, and Angel and Larry Kirby all of Paducah.
A celebration of life will be held at Trinity Baptist Church on Monday, February 5. Visitation
will begin at 11 a.m. with the service beginning at 1 p.m. officiated by Rev. Kenneth
Brown. Burial will follow at Maplelawn Park Cemetery. In lieu of flowers, memorial
contribution can be made to Trinity Baptist Church, 604 S 21st St, Paducah, KY;
McCracken County Humane Center, 4000 Coleman Rd, Paducah, KY; or a children's
charity of your choice.
You may leave a message of sympathy or light a memorial candle online at
www.hughesfuneral.com.