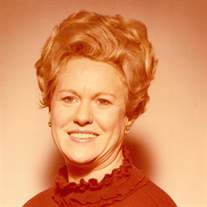 She was born Maryanna Gambol to W.O. and Frances Gambol on October 16, 1932, and was raised in Paducah.

She was a member of the 1950 graduating class of Augusta Tilghman High School. Maryanna worked as a secretary for many years both locally and later for the University of Evansville, and for Woolco and K-Mart. In 1966 she married William A. Tryerson. His work took them to Lexington, and from there to the East Coast, Florida and the West Coast. However, she always returned to Paducah.

Maryanna was of the Catholic faith and attended both St. Francis de Sales and St. Johns. She was preceded in death by her parents, W.O. and Frances Jones Gambol, her brothers Novice Lee Gambol and Waymon A. "Bones" Underwood and her husband William A. Tryerson and Companion Anthony J. Milauckas.

Graveside Services will be held at 2:00 pm on Monday, April 3, 2017 at Maplelawn Park Cemetery.

Visitation will be from 2-4 Sunday, April 2, 2017 at Hughes Funeral Home in Paducah.