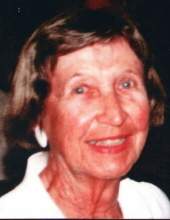 Mary Jane Alford, 97, passed away peacefully on April 30, 2017, at Superior Care Home. As she
happily once said about her life, she felt she had seen it all.

Mary Jane was born to George and Pearl Happley in Cincinnati, Ohio, on March 11, 1920. Throughout all of her school years in Cincinnati, she alphabetically sat next to classmate Jim Harris. When she went to college at Miami of Ohio, Jim went to college in Durham, North Carolina. Mary Jane graduated from Miami (Tri-Delt) in 1941. When the war broke out, Jim was a first year medical student at Duke. He left medical school to join the First Marine Division. He corresponded with Mary Jane from Quadalcanal, Cape Gloucester and Peleliu. When Jim received orders to flight school in 1944, he returned from overseas and married his high school sweetheart. During the war, Mary Jane earned her master's degree from the University of Wisconsin at Madison. When the war ended, Mary Jane and Jim returned to Durham where Mary Jane taught school helping put Jim through medical school. A son was born in Durham. When Jim was later finishing his residency in Charlottesville, Virginia, another son and a daughter were born.
Mary Jane and Jim moved the family to Paducah in 1959. They were attracted to Paducah by two fine
hospitals and three fine golf courses. Mary Jane loved golf and she played a lot. Her many golf friends
meant very much to her. Mary Jane loved water colors and she painted a lot. Her many art friends meant
very much to her. Her many friends at Whaler's Catch (the Catch Crew) meant very much to her. Mary
Jane was blessed by the friendships of so many people over the years, all of whom gave her a happy life.
Mary Jane was predeceased by her husbands and best friends, Dr. Jim Harris, Alan Park, and
Haywood Alford. She was also predeceased by her son, John Harris.

Mary Jane's family will have a private burial service for her in Paducah. She will be buried next to Jim.
Milner & Orr Funeral Home and Cremation Services in charge of arrangements.

You may leave a message for the family at www.milnerandorr.com.