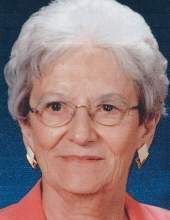 Mrs. Grumley attended Trinity Lutheran School and had formal vocal instruction. She sang and danced with classmate Dick Van Dyke, both graduating from Danville High School in 1944. Trained as a nurse's aide, she served as a volunteer during World War II. Following the war, she was the executive secretary at Industrial Glove Manufacturing Company and Merchant's Delivery both in Danville. As soprano soloist, she was featured in many school, civic, and church performances including the Victory Choir Concerts.

Mary Ruth and PJ Grumley of Eugene, Indiana, were married on August 22, 1948. In 1962, six weeks after the birth of their fourth child, the Grumleys moved from Danville to Paducah, Kentucky. With her brother, Herman Louis Hussmann, Jr., they opened Paducah's first fast-food restaurant, Burger Chef, located at the corner of Ninth and Kentucky Avenue. They eventually owned five restaurants in western Kentucky. Mrs. Grumley was a full time homemaker and mother while supporting her husband's career in civic organizations and his 20-year tenure as city commissioner. She continued to enjoy music and often sang as the featured soloist. The Grumleys were active members of St. Paul Lutheran Church where she was a member of the choir, Ruth Circle, Lutheran Women's Missionary League and Sunday School teacher.

Mrs. Grumley was preceded in death by her husband of 67 years, her parents, and her brothers William Gerhardt Hussmann and Herman Louis Hussmann, Jr.

Visitation will be from 5 until 7 pm Wednesday, April 19 at Milner and Orr Funeral Home of Paducah

The funeral will be at 11am Thursday, April 20 at St. Paul Lutheran Church with Pastors David Appold and Paul Donner officiating. Interment will follow at Maplelawn Cemetery.

You may leave a message for the family or light a candle at milnerandorr.com