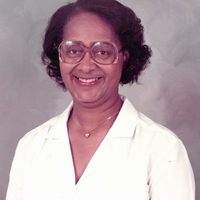 Lula Mae Williams was born on December 5, 1932 in Birdeye, Arkansas. She was the first child of eight to Tommy and Effie Mae Williams. Lula accepted Christ at an early age, and worshipped in a Baptist church.

Lula was smart, and as a teenager, was sent to St. Louis to attend a high school where she would be academically challenged. After graduation and returning to Birdeye, she met and married Wildridge ‘Hershel’ Williams. Hershel and Lula moved to Chicago where they began a life together.

In Chicago, Lula was a working wife, holding a job at Montgomery Ward. During their Chicago stay, Lula gave birth to two sons: Mark and Timothy, in 1960 and 1968, respectively. In 1980, Hershel and Lula relocated the family to the Atlanta area, where she worked in the Early Childhood Development program. Upon retirement in 2000, they settled in Paducah, KY, where they were able to enjoy travelling and playing with their grandchildren.

She is proceeded in death by her parents, Effie Mae and Tommy, and brother, Clarence.

Lula will be most remembered for her delicious meals, sense of humor, friendship, and loving wife and mother.