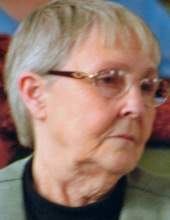 Linda Richards, 75, of West Paducah,Kentucky passed away at 8:08 p.m. Monday, September 26, 2016 at Baptist Health Paducah. She was a native of McCracken County. Linda was a member of the Lovelaceville Baptist Church where she taught Sunday School for the Pre-schoolers for 40 years. She worked for S.S. Kresege and was a 1959 graduate of Paducah Tilghman High School.

She was preceded in death by her husband, Robert Richards and 1 brother, Leroy Humphrey. Her parents were Toy Humphrey and Dorothy Rose Humphrey.

Funeral services will be at 1:00 p.m. Saturday, October 1, 2016 at the Milner & Orr Funeral Home of Paducah with Rev. Toy Brindley and Rev. Ronnie Stinson, Jr. officiating. Burial will follow in the Maplelawn Park Cemetery.

Expressions of sympathy may take the form of contributions to the Alzheimer's Association, 6100 Dutchmans Lane Suite 100, Louisville, Kentucky 40205.

You may leave a message of sympathy and light a candle at www.milnerandorr.com.