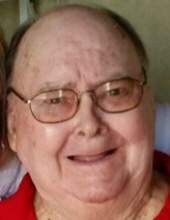 Doug was born on March 17, 1931 in Crittenden County, Kentucky to James and Effie Flanary. He was a member of St. Mark Methodist Church (now Fountain Ave. United Methodist Church) and enjoyed both hunting and fishing. He was an auto mechanic for more than 50 years, twenty five of which were spent as the owner/operator of Doug’s Auto Service in Paducah. He will be remembered for his enjoyment of life, his smile and sense of humor, and his love of family, grandchildren and a multitude of “fur babies”.