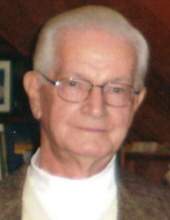 Jack was born on June 24, 1930 to the late Guthrie L. and Ruby Phillips Hester. He was a 1947
graduate of Sharpe High School. That same year, Jack joined the Army and was stationed in
Frankfurt, Germany. He played semi-pro basketball for the Army during his tenure in Germany.
After returning home, he began a long career as Controller at SKW Alloys. A long-time member of
Country Club of Paducah, Jack was an avid golfer and participated in a daily game of gin with
close friends. He also followed his beloved University of Kentucky basketball team.

He is survived by his daughter, Jill Hester of Paducah; brother, Earl (Frances) Hester of Mobile,
AL; special friend, Sue Fendley of Paducah; and several nephews, nieces, and cousins.
Preceding him in death were his wife, Juanita Barker Hester; and parents.
Graveside services will be held at 1pm Thursday at Maplelawn Park Cemetery Chapel with
County Commissioner Jerry W. Beyer officiating. There will be no visitation.
Milner & Orr Funeral Home of Paducah is in charge of arrangements.

Contributions may be made to McCracken County Humane Society, 4000 Coleman Road,
Paducah, KY 42001.

You may leave a message of sympathy or light a memorial candle at www.milnerandorr.com.