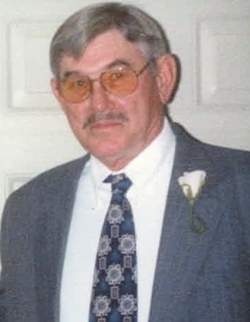 Harry Lynn Long
April 29, 1935 - May 17, 2016
Harry Lynn Long, 81, of Burna, died Tuesday, May 19th, 2016 at 7:30am at his home.
Mr. Long was a supervisor for Walker Boat Yard, and was a Navy veteran. He was one of the few remaining cowboys and loved to go on trail rides. He is survived by his wife Judy of Burna; one daughter, Sharon ( Bob)
Martin of Illinois; four sons, Stevie Long of Paducah, Gerald (Ruby) Long of Paducah, Joey Long of Kuttawa, David Ray of Smithland; two stepsons, Shane (Heather) McManus of Wickliffe, and Joe (Jennifer) McManus; two sisters, Paula Stinnet of Smithland, and June Brasher of Smithland; one granddaughter Ashley Cook of Burna; seven great grandchildren, Sheena Cook, Ruby Ann Cook, Briana, Maddie, and Landon Long, and Jonah and Hannah McManus; and several nieces and nephews.

He was preceded in death by Joseph & Alberta Long; his parents; one brother, Bill Long; and one sister, Verdine Smith. Visitation will be Monday, May 23rd, 2016 from 10am to 12 noon at Smith Funeral Chapel. Funeral Services will begin at 12 noon May 23rd, 2016 at Smith Funeral Chapel in Smithland. Burial will follow at Maplelawn Cemetery in Paducah.

Smith Funeral Chapel is in charge of arrangements. Online condolences
may be left at www.smithfc.com