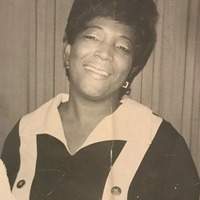 Elva Mae Fly Clark Carruthers, affectionately known as “Mae Mae”, departed this life and went to meet The King, her Heavenly Father and Christ Jesus her savior on March 30, 2020, 11:56 p.m., from Mercy Health Lourdes Hospital. Born July 16, 1939, she was a beloved and devoted daughter, mother, sister, grandmother, aunt, cousin, and friend. Her loss leaves a hole in the hearts of many.

Mae Mae lived a life of service as is witnessed by the countless friends she made and the number of foster children she had raised. She was featured in the Paducah Sun fostering over 100 children. Once you were one of Mae Mae’s kids, you wanted to always be one. And if you weren’t, you wanted to know how to be adopted into the group. She loved people and especially loved babies. She believed that feeding, clothing and loving on kids was what was needed to help a child along the way. When she decided to retire from foster care, she adopted the last two children in her care. Her special touch could be seen in the relationship she had with her autistic nephew Jose’, whom she helped care for when his mother went into the nursing home. She kept another special child, Chris Jones, when no one else seemed to be able to work with him.

She started out raising kids at a young age and after an early divorce, proceeded to raise her six children by working as a domestic, working while attending school to get her certification to work in the nursing field which she did at Western Baptist Hospital in Paducah for over25 years. She was proud that she raised her children on her own without drawing state aid. She quit working for a woman who told her she would never succeed and needed to keep working as her cook and housekeeper. She was a hard worker and would arise early to read her bible before going to work and come home at night and sit around the table with her eldest son, Dale and her niece, Audrey to do her homework.

She was a phenomenal cook. She worked alongside her sister Erma Jean Fly for Curtis Grace, catering parties. But most people knew her for the fantastic meals she cooked at home. She kept an open table and was a gracious hostess. Anyone that came to her house was invited to eat. If word was out that she was cooking greens and dressing on a Sunday, people showed up for a takeout plate. She learned her cooking skills at the elbow of her beloved mother, Viola Fly. She and her sister Nancy took turns hosting family dinners where every dish imaginable was served. She tutored her girls, Deborah, Cynthia, Doris and Rachel, in cooking skills and even teamed with her niece Audrey to demonstrate cake baking to Joyce and LaVonda.

She had a beautiful heart, smile and personality. She was always fun to be around. She loved to entertain and kept her dining room table set for the seasons. She put a decorative touch to her living just like B. Smith or Martha Stewart would. From her travels, she learned to make margaritas and always wanted a pitcher full to serve at her dinners until Rose Hulum Young sent her a bottle of Moscato. Rose being Audrey’s college roomie and sorority sister was adopted as a kid. From then on she served that wine and waited for Rose to send her a bottle each year. She had a big smile and the camera loved her; she never took a bad picture. She liked sitting on her porch with her sister Jean, friend Connie Coleman, her pastor’s mother- in-law, Karla and her niece, Doris. Mae Mae was a member and past president of the Brunch Club and always enjoyed preparing meals for the members.

Elva accepted Christ at an early age at Husband Street Baptist Church. She loved her church, sang in the choir, and faithfully attended and had taught Sunday school at Washington Street Missionary Baptist Church until her health prevented it. She referred to her pastor, Rev. Raynarldo Henderson, as her son and characterized his wife, Cherie, as a jewel and also cooked special meals for her son.

Mae Mae loved to travel and went on many trips with her sisters, friends, and families. She began traveling with her daughter, Doris, as soon as Doris got her first job upon graduation. She was afraid to fly until she went to Hawaii with her sisters Nancy and Erma Jean. After that, she travelled with Doris and Tiffany all around the world and became the focus for cruises for Mae Mae’s family and friends. As her health failed, she looked forward to trips to visit her nieces, Mona, Kassandra, and foster daughter Mary Philpot in Virginia.

She loved family gatherings with her sisters and brother and all her kids. She admired her older sisters, the New York City girls and doted on all her children, grandchildren, great-grandchildren, nieces, and nephews. To be one of Mae Mae’s kids was special as she treated her nieces and nephews as her own. Foster children felt the same love. Because she went back to school, she supported all her kids in getting an education and attended graduation for all including Candyce, Veronica, Tiffany and doctoral ceremonies for Audrey, Monique and Doris.  She took pride in standing in as mother of the bride and grandmother of the bride for nieces, Mona Carter Lamberg, Keisha Brown and Monique Kennerly. She relished every part of the ceremony she was asked to do.

Elva never met a stranger. Wherever she went, she became the life of the party. She would dance even on her walker or scooter. She had a beautiful voice and would sing along to the music playing. She had a personality that gravitated people to her. Everyone loved her and would give her gifts. She loved collecting bird figures and just like she loved to hug on babies, she loved pets, especially her dogs, Star and Mr. Lincoln.

She loved to listen to her spirituals, but she loved some Aretha. She loved to tell how she would wake Audrey up to play her some Aretha, even if it was a school night. She loved football, but only if it was the Dallas Cowboys. She watched her sons, Dale and David, play football and followed them all through high school and college. When David became a Cowboys fan, then she was a Cowboys fan and would asked Quincy and any other child in the house to watch the game with her. Even when Candyce moved to Pittsburgh, she remained a Cowboys fan. She had that same loyalty to her children and family. She never waivered in her faith and was commitment to them. She fought like a Mama Bear to defend anyone of them.

In compliance with state mandated directives, the funeral service will be private.