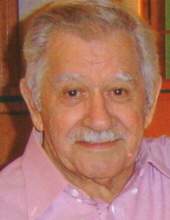 Edgar Oscar Levin, 95, of Paducah, KY, passed away at 7:50 pm Thursday, July 27, 2017 at Parkview
Nursing and Rehabilitation Center.
Edgar was born in Cahokia, IL on April 11, 1922 to Alfonse and Isabelle Levin. He served his country in
the United States Army/Air Force during World War II. He retired from the Maintenance Department of
B. F. Goodrich and was of the Lutheran faith. He was a member of the Gilbertsville American Legion
and loved to spend his free time fishing.
Mr. Levin is survived by his daughters, Karen Oldham and husband Wayne, of Princeton, KY, Gina
Fraser and husband David, of Paducah; his sons, Edward William Levin and wife Martha, of Westville,
IL, Michael Louis Levin, of Maderia Beach, FL, Robert James Levin, of Gilbertsville, KY; eight
grandchildren; six great grandchildren; and three great great grandchildren.
Mr. Levin was preceded in death by his wife of 67 years, Lois Catherine Mueller Levin; his parents,
Alfonse Levin and Isabelle Chatillion Levin; four sisters; and three brothers.
Funeral services are scheduled for 1:00 pm Wednesday, August 2, 2017 at Milner & Orr Funeral Home
and Cremation Services of Paducah, with Rev. Paul Donner officiating. Entombment, with Military Rites,
will follow at Maplelawn Park Cemetery.
Visitation will be held from 11:00 am-1:00 pm Wednesday, prior to the service, at the funeral home.