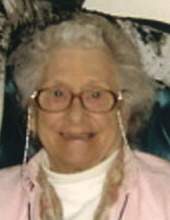 She was born on November 29, 1918 in St. Louis, Missouri. In 1946, she married James E. Toy, Sr. and moved to Paducah. She served as Director of Christian Education for 22 years at First Presbyterian Church. During this time, she was nationally certified by the Presbyterian Church U.S. A. to conduct seminars on church curriculum to other Directors of Christian Education. She was a founding member of Paducah Cooperative Ministry, a board member and committee member for many years. While at First Presbyterian Church she saw a need for a senior citizens group. She founded the Elderblooms. While working witht he Elderblooms, they voiced an interest in travel. Under her leadership, this group traveled extensively across the United States and abroad. She wa an active member of the Market House Theater for many years. She served on the board of directors, play selection committee and performed in many productions. She served on the local board of the American Cancer Society. She was a Paducah Ambassador, gave school group tours of the flood wall murals and was a tour guide at the National Quilt Museum.

The family wishes to express deepest gratitude to the staff of Wing 6 at Parkview Nursing and Rehab. This includes RNs, CNAs, activity staff, maintenance staff, housekeeping and food service. They were exceptional. The family, on her behalf, would like to express appreciation for the friends who sent cards, called her and visited while at Parkview. Dr. Richard Smith was a friend and a doctor for 40 years. His special care is greatly appreciated.

Mrs. Toy is survived by her son, James "JT" Toy, Jr. of Paducah, KY and her daughter, Kathlynn Kahl and husband Hobson of Charlestown, IN; her stepson, Joseph Lynn Toy and wife Jennifer; and her special cousin, Anne Nelson of Springfield, MO.

She was preceded in death by her husband, James E. Toy Sr.,; her parents, George and Caroline Moehle Smith; one sister, Virginia Maserange; and one brother, George Smith, Jr.

Visitation will be held from 12:30 pm until 2:00 on Tuesday, October 24, 2017 at First Presbyterian Church followed by a service of Witness to the Resurrection with Rev. Dr. Jenna Goggins officiating.

A private family graveside service will be held at Maplelawn Park Cemetery.