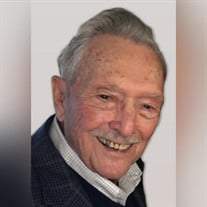 At the age of 94, Charles Ray Baker born at home in Elva, Kentucky on December 29, 1927 went home to the Lord after a fall and short stay in the hospital.

Charles worked from 1952 until April 1993 at the Paducah Gaseous Diffusions Plant as an Operations and Instrument Foreman. After he retired, he continued to work and help others.

He was known as Dad, Papaw, Charlie Ray, Preacher, but he was most known as a Christian who made life easier for many of those less fortunate. He collected and provided furniture for many people transitioning from Lifeline Ministries, CenterPoint and any others he came in contact with. He spent many years working jail ministry and enjoyed telling people he “just got out of jail”. Charles was an active Gideon for many years.

A World War II Veteran, he was proud to have served as a Marine. He served in Hawaii as an air traffic controller and after his discharge he was called back a year later to serve for the Korean Conflict. Once a Marine always a Marine. He was thrilled and privileged to take flight in the WWII B25 Bomber at the Paducah Airport, as well as the Honor Flight to Washington, DC last year.

He is survived by his son, Charles “Rodney” Baker (Kathy) of West Paducah; 5 grandchildren, that he loved and cherished, Jennifer Winstead, Matthew Baker, Rachel Baker Foley, Hope Winstead and Ryan (Trina) Winstead; 9 greatgrandchildren, that were a constant joy for him.

Visitation will be held from 11:00 AM to 1:00 PM on Friday at Gospel Mission Worship Center.