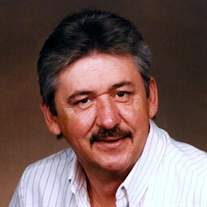 November 17, 1946 - May 8, 2016
Charles D. "Doc" Adams, 69, of Sharpe died at 9:53 AM Sunday, May 8, 2016 at Baptist
Health of Paducah.
Mr. Adams was a retired Truck Driver, a member of Southland Baptist Temple of Paducah
and a Veteran of the Army in the Vietnam War.
He is survived by his wife, Ruth Adams of Sharpe; son, Charlie Adams of Benton; two
daughters, Penny Adams of Benton, Katina Adams of Benton; brother, Ben Adams of
Paducah; eight grandchildren; four great grandchildren; several nieces and nephews.
He was preceded in death by his parents, Ben & Thelma (Love) Adams; one son, Todd
Adams; one sister.
Funeral services will be held at 11:00 AM Thursday, May 12, 2016 at Hughes Funeral
Home of Paducah with Rev. Topper Council officiating. Burial will follow at Maplelawn
Park Cemetery in Paducah.
Visitation will be from 5:00 PM to 8:00 PM Wednesday, May 11, 2016 at the funeral home.
Hughes Funeral Home of Paducah is in charge of arrangements.