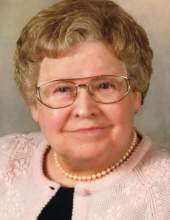 Anna June Starrett Nickell, 90, died at 12:30 pm, on Monday, April 24, 2017, at The Ray & Kay
Eckstein Hospice Care Center in Paducah, Kentucky, following a brief illness. Until recently, she was a
spry and cheerful resident in Gaither Suites at West Park, where she received personal care. She had
surrendered her life to Christ and went peacefully to be with her Lord.

Anna June was born on October 11, 1926, at the home of her parents, Ernest Rose Starrett and Patsy
Cornwell Starrett, located on Ashbrook Avenue in the Southside area of Paducah, Kentucky. She
attended Franklin Elementary School and Franklin Junior High School, and graduated in 1944 from
Augusta Tilghman High School, where she was named to the National Honor Society and was affiliated
with the chorus, drill corps, and speech and debate team. Following high school, Anna June briefly
studied at Memphis State University as part of the Nursing Cadet Corps before accepting employment in
Paducah as divisional secretary for Kentucky Utilities, where she worked for the next twelve years.
Anna June demonstrated a strong and enduring Christian faith, positive and persistent spirit, righteous
and trustworthy character, cheerful and gracious disposition, dependable and effective work ethic, and
wholehearted calling to love, encourage and serve others. In life and through her profession, she worked
for equality and justice, knowing both sprung from faith and education.

The qualities Anna June demonstrated were shaped as she grew up during the Depression era,
experienced the catastrophic Flood of 1937, and endured the horrors and hardships of WWII. In
particular, her formative years were spent as a faithful member of Trinity United Methodist Church,
where she was active in the Epworth League, attending many local and district meetings of the youth
fellowship and participating in summer youth conferences held at Lambuth College in Jackson,
Tennessee.

Having begun piano lessons while in the fourth grade, Anna June was later taught to play the organ by
Mrs. Lynn Werner, the organist and music director at Broadway United Methodist Church. While still a
teenager, she began serving as organist at Trinity United Methodist Church-thereby initiating a sixtyfour
year ministry of service as organist and director of music at various area churches, including the
Northside, Aldersgate, St. Luke and St. Luke-Aldersgate United Methodist congregations. For over thirty
years, she also helped her husband organize and lead busloads of area lay leaders and volunteers in
attending the denomination's Southeastern Jurisdictional Laity Conference in Lake Junaluska, North
Carolina.

On December 19, 1948, Anna June married her childhood friend, Carl Duane "Red" Nickell, at Trinity
United Methodist Church, in a ceremony featuring their favorite song, "Always" by Irving Berlin. With
the birth of the couple's two sons, she became a full-time mother. When "the boys" entered school, she
returned to college and in 1968 earned a Bachelor of Arts degree in Elementary Education from Murray
State University, where she later obtained her Master of Arts in Education Administration and Rank I
degrees.
Anna June was mentored by her principal and lifelong friend, Dove Anna McNabb, in her first teaching
appointment at Jackson Elementary School. She later taught at Cooper Elementary School and Morgan
Elementary School, and served as curriculum coordinator at Jetton Jr. High School. The highlight of her
professional career as a Paducah educator came when she served as principal at Whiteside Elementary
School, where she introduced many new educational programs and events, including an interactive
"Williamsburg Heritage Festival," featuring diverse cultural demonstrations, storytelling, music, arts and
crafts.

Upon retirement, Anna June remained active in church activities and civic organizations, including the
Paducah Lions Club. She received many honors, including being named a Duchess of Paducah and a
Kentucky Colonel. However, her most cherished professional reward was the lifetime happiness and
achievements of the many young students in whom she had invested her love, teaching, and
encouragement.

Visitation will occur from 11:00 am until the funeral hour Saturday, April 29, 2017, in the sanctuary of
Broadway United Methodist Church in Paducah. The funeral service will begin at 1:00 pm, with Rev.
Joe Beal, Dr. Richard Beck and A. O. "Chip" Wynn officiating. Burial will follow at the Maplelawn
Park Cemetery in Paducah.

In lieu of flowers, the family suggests donations be made to Easter Seals West Kentucky Child
Development Center, 801 North 29th Street, Paducah, Kentucky 42001.
You may leave a message of sympathy or light a memorial candle at www.milnerandorr.com.