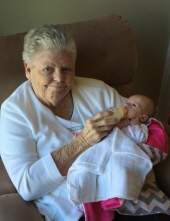 She was the only child of the late Flaval and Mary (Mangrum) Masters. Alma married her best friend Jack and spent the next 67 years faithfully by his side.

Scobee Funeral Home, Winchester is in charge of arrangements. A private family service with Lee Cruse officiating will be held with burial following in the Maplelawn Park Cemetery in Paducah.